We are always interested in what Alan Moore is working on. A Co-Founder of the legendary NYC space ABC No Rio and a member of the defunct group COLAB, Alan is always exploring fascinating underground art and social spaces, squats and alternative histories. Recently Alan was passing through Chicago so we made sure to have him bring us some copies of "House Magic" - his newest publication for an exhibition on European Social Centers that took place at ABC No Rio in Spring 2009. Also check out Alan's book on ABC No Rio that we are also selling.

The contents of this 'zine are as follows:

Why "House Magic"? - a background on why this project was undertaken
Film and lecture program
Excerpts from an exhibition about the New Yorck Bethanien
Michel Chevalier discusses the Rote Flora in Hamburg, and projects at the New Yorck Bethanien
Communique from RampART Social Centre
Micropolitics plans in London
400th anniversary of Dutch squatters in Manhattan
Lrax City Mine(d) call for a European Conference of Social Centers
A Roof Over One's Head by James Graham
Atelier ESC, Rome, by Virginia Vilari
Communique from Social Center Cox 18, Milan
Michel Chevalier translates "Rhino Féroce," about a Geneva squat
Danish artists talk about a road occupation in Copenhagen at the University of Trash
Credits and Acknowledgements 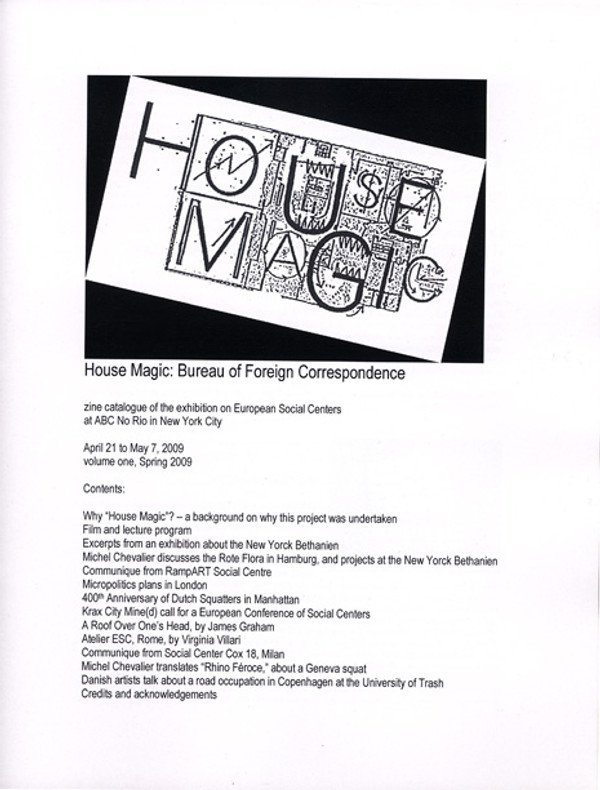